Miriam Cutler and Amy Anderson received an Official Nomination for the Hollywood Music in Media Awards (aka HMMA) for their original song "Women Unite" from Amy's project Women Warriors: The Voices of Change.

Women Warriors: The Voices of Change is a ground-breaking concert creation that honors the strength and heroism of global activists fighting for social justice, human and civil rights, environmental causes, minority rights, gender equality and for the right of every girl to have access to education.  A cultural tour de force whose time has come, this project highlights the achievements of past and current activists who have risked their lives in the name of women’s rights.

In partnership with Orchestra Moderne NYC, Riga Cathedral Girls’ Choir and conductor Aira Birzina, Amy Andersson, and an incredible team of award winning Hollywood female composers and songwriters have created an inspiring and uplifting, multi-media symphonic concert that gives voice, hope, and courage to women and girls around the world. The world premiere was on September 20th, 2019 at Alice Tully Hall, Lincoln Center.

Miriam is proud to be nominated and a part of the project alongside fellow nominees Lolita Ritmanis and Penka Kouneva as well as all the other wonderful composers represented on the album.

For more information on Women Warriors - The Voices of Change please visit their website: https://womenwarriorsthevoicesofchange.com/

The HMMA Awards will take place November 17, 2021 at The Avalon in Hollywood.

The Hollywood Music In Media Awards™ (HMMA) is the first award organization to honor original music (Song and Score) in all visual media from around the globe including film, TV, video games, trailers, commercial advertisements, documentaries and special programs. The HMMA nominations have historically been representative of the nominees of key awards shows that are announced months later. The HMMA main event features live music performances, celebrity presenters, tributes to music industry icons, awards for composers, songwriters and artists. 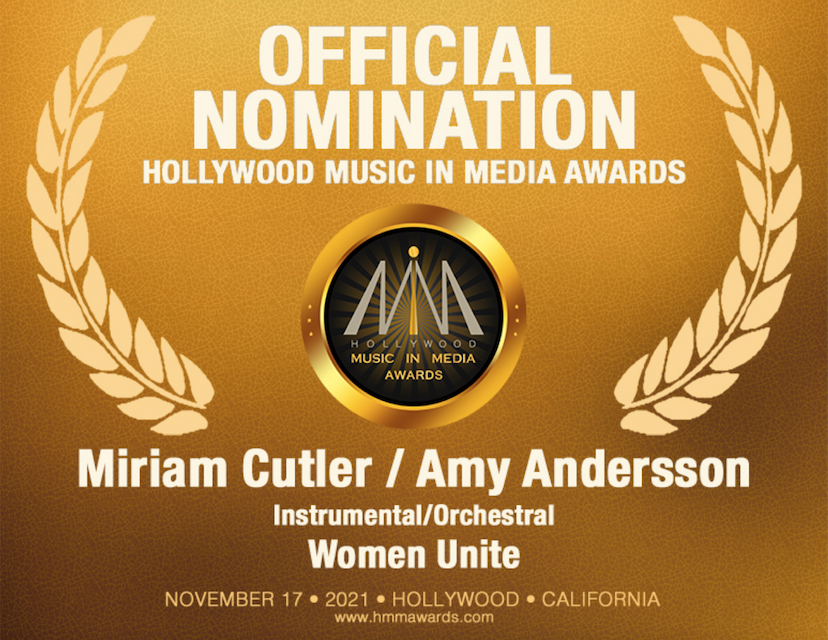