Congratulations to filmmaker Sari Gilman for KINGS POINT. I'm so proud to have scored this unique film.

The Academy of Motion Picture Arts and Sciences today announced that the field of Documentary Short Subject contenders for the 85th Academy Awards® has been narrowed to eight films, of which three to five will earn Oscar® nominations.

Voters from the Academy's Documentary Branch viewed this year's 31 eligible entries and submitted their ballots to PricewaterhouseCoopers for tabulation.

The eight films are listed below in alphabetical order by title, with their production companies: 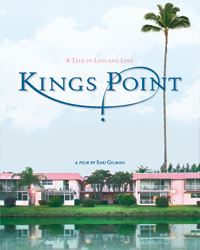 The 85th Academy Awards nominations will be announced live on Thursday, January 10, 2013, at 5:30 a.m. PT in the Academy's Samuel Goldwyn Theater.

Academy Awards for outstanding film achievements of 2012 will be presented on Sunday, February 24, 2013, at The Dolby Theatre™ at Hollywood & Highland Center®, and televised live on the ABC Television Network. The Oscar presentation also will be televised live in more than 225 countries worldwide.